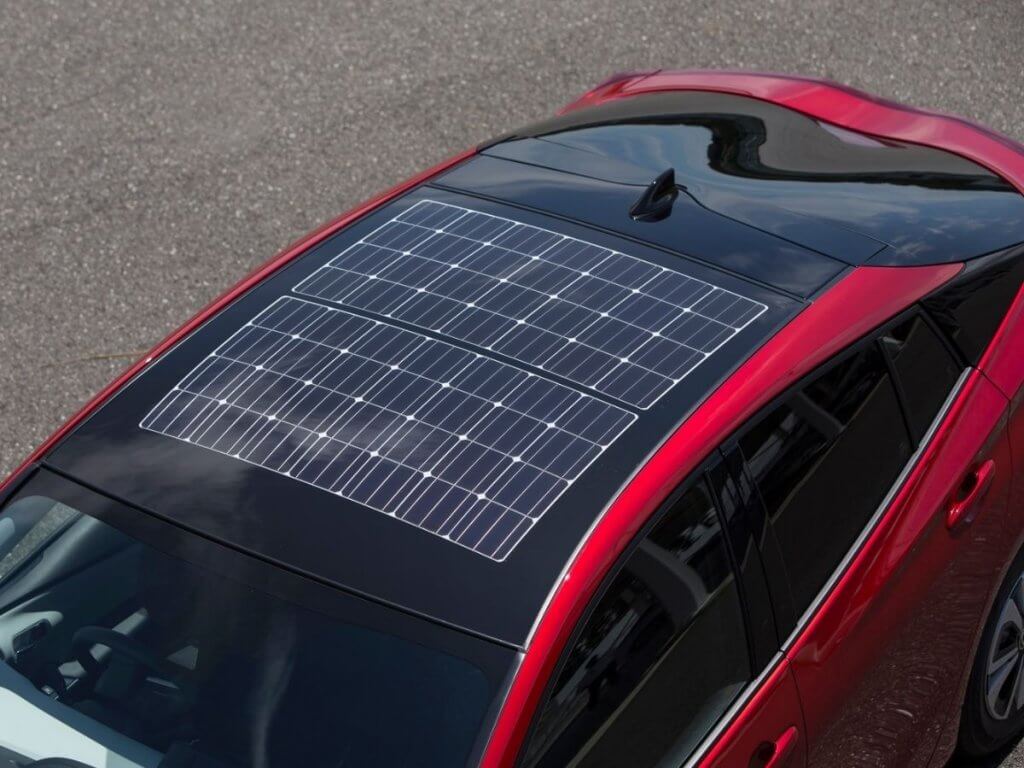 In this article, discuss that can you put the solar panel for car roofs. Also, does it has any side effect that why solar panels are not used in the car?  how do solar panels attach to car roofs? and obviously, solar cars are expensive to buy.

In this moderate period, everyone moves towards solar product obviously it is expensive to purchase but have many other benefits. These days there are many international brand companies working to launch their solar car.

Are the Cars with solar panels on their rooftop?

The answer to your question is that cars with solar panels on their rooftop are yes. “Yes, it is”. Because through this process the top of the roofs generates energy, as compared to the normal cars, where you had an expense on petrol to run your car.

The Solar Charging System is composed of the solar panel, controller, and battery. The car when under sunlight it enters the cell surface of a solar panel, also it is separated electrons and electron holes, creating energy. Whenever in the case of a 100 W class solar panel attached, 1Sun unit (summertime midday 1000 W/㎡ light quantity) generates 100 Watts of power. Simply, in short, 1 hour of sunlight can generate 100 Watt-hours of stored energy.

How can I  put solar panels on the car roof?

Let us discuss how I attach the solar panel on the car roof by my own self? this is how to look lift solar panels onto the roof of your vehicle and place solar panels where you wish.

Why solar panels are not used in cars?

The reason is very simple main speed bump has been that the solar panels sized for the top of a car would not be sufficiently powerful, efficient, or large enough to actually power the vehicle. Also, the cost has been prohibitive for commercial viability.

Reason: the main reason is simple math. It is described as “there are limits to how much energy can be captured by a car-sized solar panel”. in between the sunlight reflected by and absorbed by the atmosphere, just only about 55 percent of the energy received by the earth makes it to the ground.

due to some limitations of using photovoltaic (PVC) cells in the solar cars have few drawbacks are given below.

The Power density: The power that comes to power from a solar array is limited by the size of the vehicle and the area that can be exposed to sunlight.  Maybe it can be overcome by adding a flatbed and connecting it to the car and this gives more area for panels for powering the car. therefore when energy can be accumulated in batteries to lower the peak demand on the array and provide operation in sunless conditions, so the battery adds weight and cost to the vehicle. Obviously then the power limit can be mitigated by plugging in and recharging the batteries from the electrical grid.

Prize/Cost: when the sunlight is free, the PV cells is not captured that sunlight. just because the cost of solar cells is steadily declining (22% cost reduction per doubling of production volume)]

The main design considerations:  While through the sunlight there has no lifespan, that the PV cells do. The major duration of a solar module is approximately 30 years. The standard photovoltaic often come with a warranty of 90% (from nominal power) after 10 years and 80% after 25 years. Mobile applications are unlikely to require lifetimes as long as building-integrated PV and solar parks.

Current PV panels are mostly designed for stationary installations. whenever to be successful in mobile applications, PV panels need to be designed to withstand vibrations. These solar panels, especially those incorporating glass, have significant weight. Just in order for its addition to be of value, these solar panels must provide energy equivalent to or greater than the energy consumed to propel its weight.

Yes, the answer is yes because the construction, technique, and material needed for the production of solar cars are expensive. So here we talk about the expense of the solar car is slated to begin production in late 2022, the price will be around 6,800 Australian dollars.

FOR THIS PURPOSE the two co-founders previously worked at Light year, a startup MAKING a solar-powered electric car for the luxury market. The first car will start at around 135,000, Australian dollar though the cost will go down as production increases.

There I explain some reasons that why solar panels are not used in cars with some limitations that fall in the disadvantage list. Yes, it is more expensive to buy a solar car rather than a normal car.